Off from work and enjoying the nice weather.    Fellow RVers, Tom and Marci and their sons Nicolas and Bryce arrived in Detroit Lakes earlier in the day.   We met them a few years ago at an RV Dreams rally.  So glad they were able to stop by for a  visit.

Judy had a tour in the refuge this morning.  One of the couples in the tour follows Judy's blog and were here for a visit also.   We all gathered for a cookout and great conversation.  John even fried up some pickles as an appetizer.  He had planned to cook some last week so Judy could taste them but he didn't have all the ingredients.  Today he was prepared. 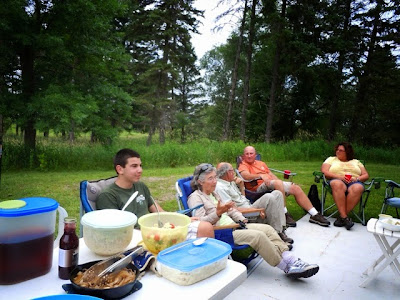 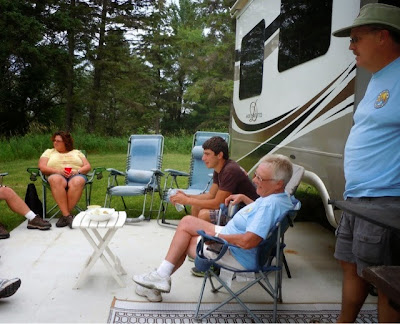 Shortly after dinner the skies became overcast and soon we felt a sprinkle or two.  John and I wanted to take Tom, Marci, Nicolas and Bryce on a tour of the refuge and were a little bummed that the weather didn't cooperate.  We decided to give it a try and loaded up and headed out.  Within minutes a light rain was falling.  Marci was able to get a few pictures so all was not lost.

We enjoyed meeting David and Sherry and seeing Tom, Marci and their sons again.  Hope to see them all again down the road again real soon.