Meeting up with Steve and Sandy and moving on to Novia Scotia.

On our last two days on Prince Edward Island (PEI), our RV friends Steve and Sandy arrived in the area.  We met up and had ice cream then made plans to do some touring the next day.  There were a couple of lighthouses in the area so off we went to get some photos. 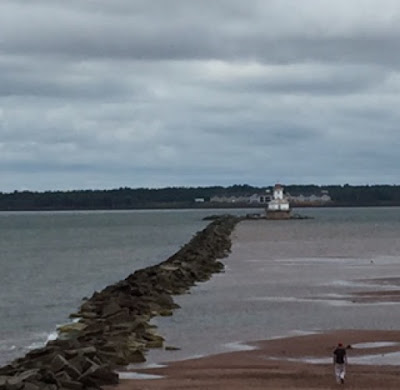 Summerside Lighthouse. This one was so far way I couldn't get a good picture. 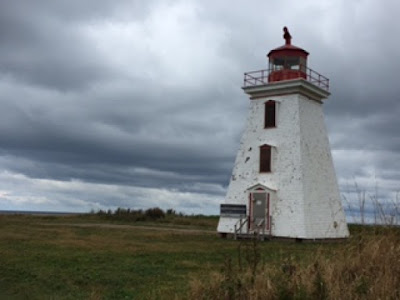 Cape Egmont Lighthouse. The scenery from this side of the light house wasn't much to look at but when we turned around and walked a few feet away it was awesome. 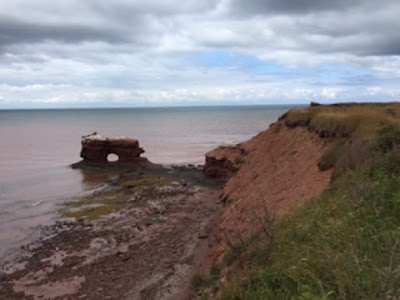 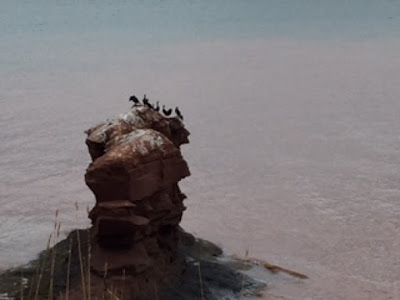 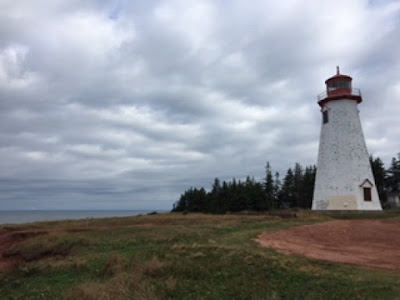 We left this area and rode around some more and came across this very old Catholic Church with an old cemetery on the grounds next to it.  The entry way to the cemetery was written in French so I do not know what it says.  I was interested in it because the name Gaudet was listed on the stone gate.  My great grandfather was Abel Roman Gaudet and his decendants came from the area. 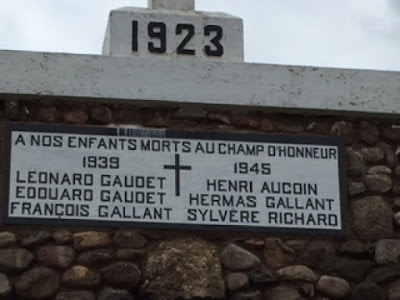 This is the sign at the top of the entrance. 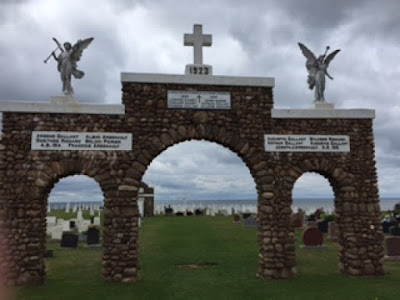 This the entrance to the cemetery. 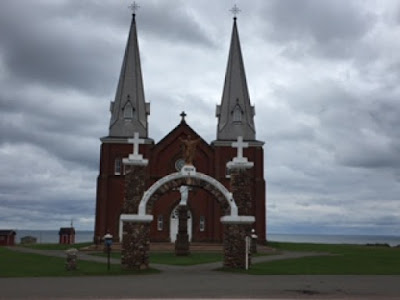 By the time we finished touring around we were all hungry and we're ready for lunch.  Plus, it was Steve's birthday so we had to celebrate.  We had lunch at a place called 2 Brothers Restaurant.  The service and food were both great. 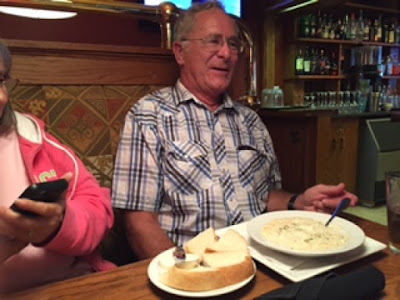 Steve with his bowl of seafood chowder and homemade bread.

The next day was our last day on PEI so we joined Steve and Sandy and toured the Ship Builder's Museum and the Acadian Museum.  The Ship Builders Museum is located at Green Park and the fee includes the museum and a guided tour of the James Yeo House. 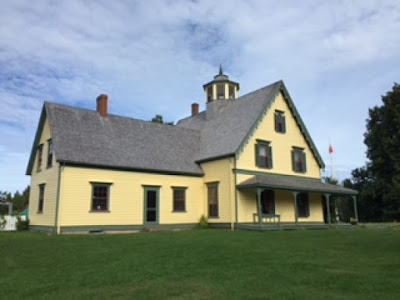 The Acadian Museum had lots of history of the French people who stayed on PEI when many of them were run off.  I found some information the Gaudet's there also.

At the Acadian Museum they have audio instructional displays explaining the dance steps...just in case you want to give it a try.

On Monday, August 29th we said farewell to PEI and crossed over the Confederation Bridge and into Nova Scotia.  Of course you have to pay to get off the island.  Ouch!

Our next destination was Caribou-Munroes Island Provencial Park in Pictou.  It is a nice park with beautiful scenery but no hook ups.  On the way that day we stopped off to photograph a lighthouse in Victoria. 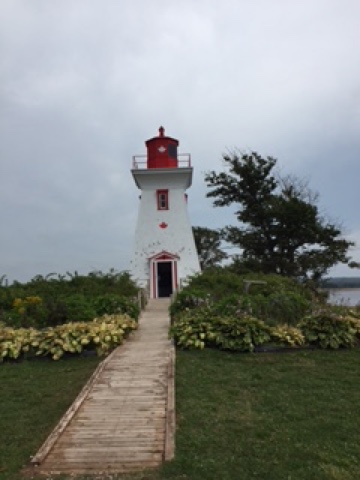 After getting settled in at Caribou-Munroes campground we drove into Pictou to look around and grab a bite to eat.  The weather was sunny and warm when we left so we didn't bother closing the windows on the motorhome.  It was real windy but it had been windy all day so off we went to town. 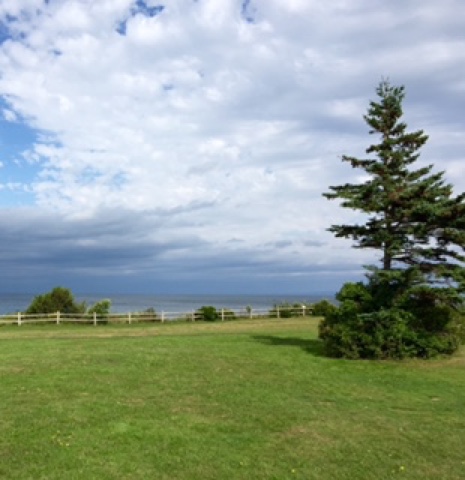 The view from the front of the motorhome. 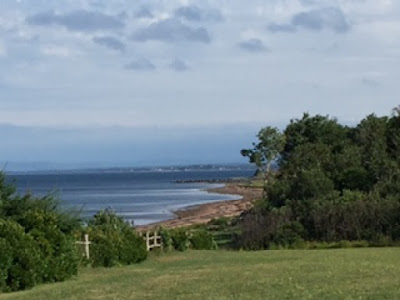 The view down a little ways from our site.

While walking around town we spotted a three masted ship at the dock. 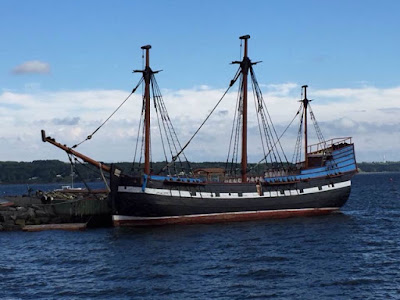 It turns out that this is a replica of the ship "Hector".  The original "Hector" (built in the Netherlands before 1750). Very cool.  It looks like it is still a work in progress but I think it is beautiful.

See the blue skies in the above picture....well it didn't last long.  Right after snapping this picture we walked across the street to the Losbter House Restaurant and Grill, ordered our dinner when the skies turned dark and the rain began to fall.  At one point the wind was blowing the rain sideways.   We hurriedly finished our meal and rushed back home to a wet mess from the open windows. Uck!  It wasn't too bad.

The next day we took road trip to Cape George Point to sightsee.  Our first stop was at the lighthouse in Arisaig Point which was actually a replica of it.  This inside of it was an ice cream shop so we got us each a cone and ate it while enjoying the scenery outside.  Our last stop was Cape George Lighthouse. 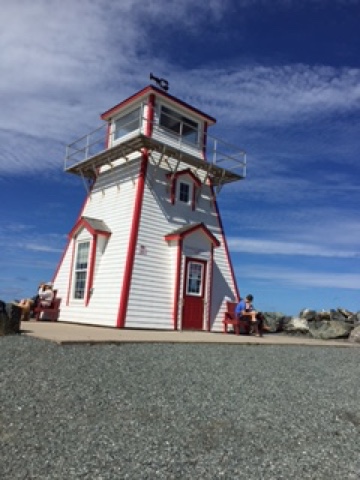 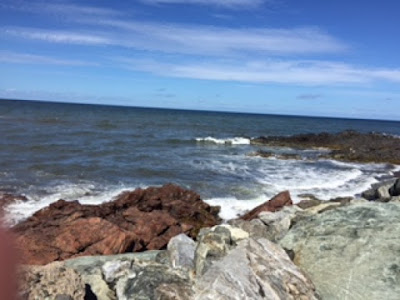 Scenery behind the lighthouse. 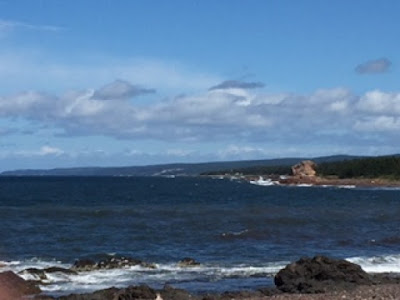 Another view of the secenery behind the Arisaig Point Lighthouse. 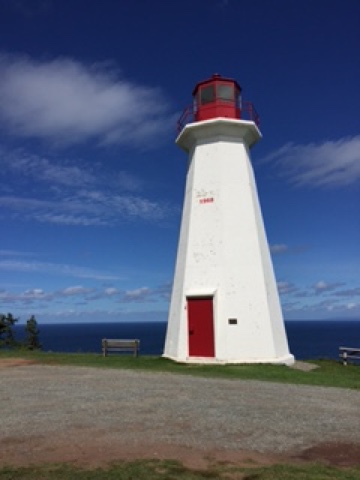 The next day we moved on to Adventures East RV park in Baddeck where we met up with Steve and Sandy again. Today toured the Alexander Graham Bell National Historic Site.  It is very interesting and very well laid out.  We spent the afternoon taking a scenic drive in the surrounding areas. 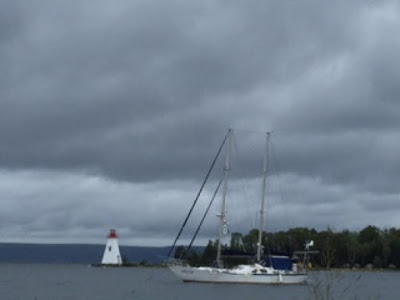 This was the view from window of the Alexander Graham Bell National Historic Site.

It was late by the time we got back into Baddeck but just in time for sunset pictures. 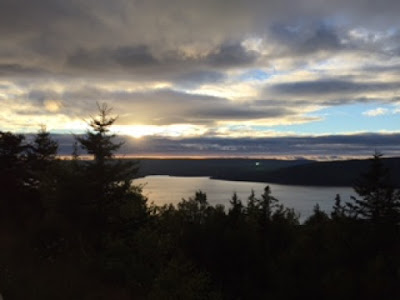 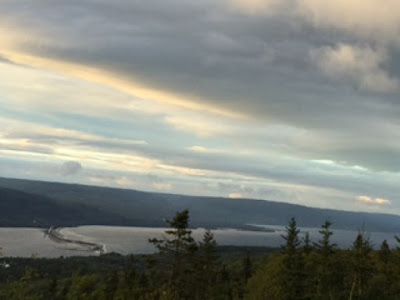 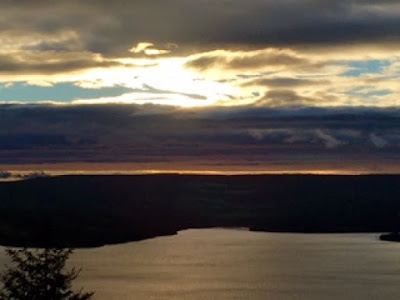 What a lovely way to end the day.

We plan to tour the Cabot Trail but are waiting until the weather gets better.  Hopefully we will have sunny skies on Sunday.

One thing is for sure, if you travel to this area you need to plan to stay for a while.  Lots to see.