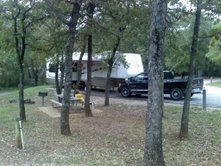 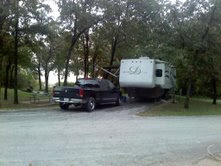 Our site at Hickory Creek COE looking toward Lake Lewisville

We are at Hickory Creek COE after a 4.5 hour trip from Canyon Lake and the rest of the story. We made one stop for lunch at a rest area. We arrived around 3:30 to what we thought was Hickory Creek but the GPS took us to Lake Lewisville RV park which is run by the City of Lewisville. I asked the lady inside where HC was located and she said she didn't know the address but it was the Swisher Road exit and gave me the direct number to the park. We drove up and exited at Swisher and I called the number, the lady answered and I asked for directions. She said which way are you coming and I told her I35 North exiting on Swisher, "Do I turn right or left". She said which way are you coming from, I said Northbound I35 like I am heading to Oklahoma. When I exit Swisher do I turn right or left. She said did you cross over the bridge? You have to cross over the bridge. By this time I had exited and turned left assuming it was in that direction. I then told her I was on Swisher and did not see any signs for the park and she said, Did you cross over the bridge? I asked if there was anyone else I could talk to and she said no. I told her we would drive around until we found it. I called Speedy but got his voice mail. We drove down Swisher and made some turns thinking it would take us close but ended up being a dead end. This bites when you are towing a 36' trailer. Plugged in the original address and got back to the interstate and headed back to Swisher Road exit and turned right. We crossed over a bridge so we thought we were close and drove down and few miles and found the Little Elm police station and turned in. Walked in and asked where the HC CoE campground was located. Answer: Never heard of it. She looked it up and said I needed to go back over the bridge and it was somewhere off of Swisher and gave me a partial printed map. I had to back out of there too. I entered one of the street names and off we went. It is now 5:30 and we finally arrived, 6.5 hours later. Got set up and turned the air on, no power. Electrical management system showed L1 with 127 volts and L2 with 3 volts and a low voltage code. EMS will not turn on in a low voltage situation to protect the electrical system of the trailer. The campground host was not in so I drove back around to the gate. The maintenance people got off at 4:30 but she reported the problem. Should be repaired in the morning or we will be moved to another site. I am currently hooked up on the 30 amp plug. We left out to Walmart for fuel and groceries but on the way Bridget said she was hungry and so was I so we stopped off at a very good Italian restaurant. We are back at the CG. I am still coughing at night so I haven't had a good night sleep in a while. Changed up my meds at Walmart. Hoping for a good night sleep.