Chiropractor for John….Spa Day for Fred

John got up this morning with a catch in his back. It started bothering him yesterday after we toured the cave. He had to bend and stoop a lot during the tour so that may have aggravated it. A hurting back is no fun.

Later in the morning we drove to Glascow and dropped Fred off at the groomers then it was time to find some lunch. As we drove through Glascow John spotted a restaurant called Big Moose’s BBQ. Anyone who knows John knows he loves him some BBQ….so I guess you know where we ate. LOL John had baby back ribs, slaw and beans and I had the grilled chicken sandwich. The food was very good. After lunch we still had some time to kill before picking up Fred so it was off to Wal-Mart for some soap making supplies. Yes, that’s right soap making supplies. John has started making his own laundry detergent. From Wal-mart we drove around taking in the scenery until John passed a chiropractor’s office. Since his back was bothering him and he hasn’t had an adjustment since we left MS, he stopped in to see if they would work him in. He was in and out in 20 minutes which gave us just enough time to pick up Fred. 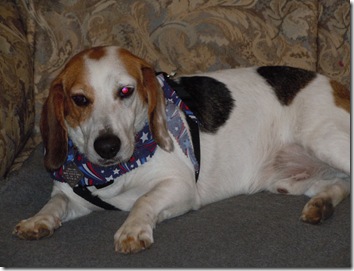 Fred with his red, white and blue bandana he got from his spa day at the groomers. 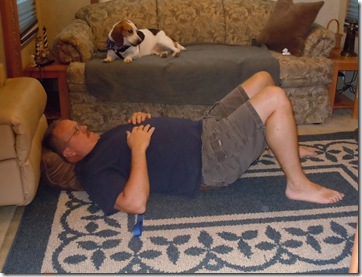 John lying on the floor with a cold pack under his back after his chiropractor visit.

Tonight we drove over to Betty and Joes for some more 10 Penny. When we got there John had a hard time getting out of the truck and up the stairs as his back was really hurting. He took some Advil as soon as he could. Betty had steaks, potatoes, steamed vegetables and crescent rolls for dinner. Thanks Betty for a wonderful meal. Now it was 10 Penny time. We played two rounds and I was on a winning streak. Quite rare but believe it or not it happened. LOL