Slept in a little later today. After John had his breakfast of eggs, grits, bacon and toast he headed over to Joe and Sherri’s to see if they could finishing fixing the dryer. I walked over a little later and sat and visited with Sherri outside enjoying the sunshine and cool temperatures. Soon Leslie joined us and we began talking about the plans for the day and, of course, food.

After finishing with the dryer John and Joe went over to help Mike finish installing his max air vent covers. 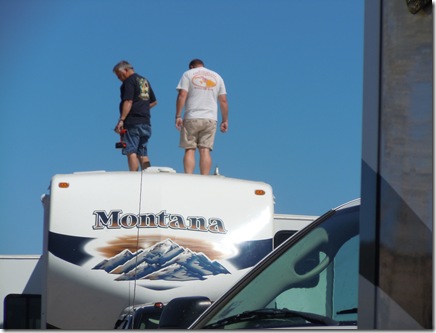 Mike and John contemplating their next move. 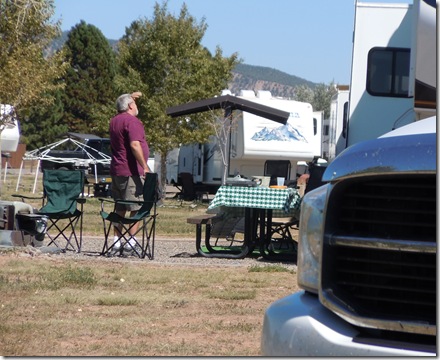 Joe down below ready to toss tools up to Mike and John.

By mid afternoon the day’s projects were completed and some of us were sleepy and ready for a rest. We were all gathered in Joe and Sherri’s RV when suddenly we noticed Joe was not talking. He had fallen asleep in his chair. Here is Joe all tuckered out.

John got up and walked back to our RV for a nap. I think Mike dozed off on the sofa. Sherri, Leslie and I continued visiting. I don’t know how the men continued to sleep through that. LOL

Tonight the gang traveled to Ignacio to Sky Ute Casino to attend the Native American Comedy Club. The show began at 8:00 p.m and lasted until 11:00 p.m. It was interesting listening to humor from the Native Americans’ perspective. They were very funny as they poked fun at just about every race including their own. Everyone really enjoyed the show. We had no idea the show would last for three hours and being that none of us had eaten before the show……we were starving. As soon as the show was over we went in search of food. We found a little cafe inside the Casino that served late night menu items. Yeah! We were in luck. Now that we were energized again it was time to play the machines. None of us were big winners but we had a great time.